This list inspired to me to make my own (and to watch new ones).


Our Family Favorites
(in no particular order)

1. Home Alone.  It's usually the first one we watch.

3. Family Man.  This is one my hubby and I watch alone every year.  It's a great reminder of the importance we do day in an day out as Mom & Dad, Husband & Wife.

6. Santa Clause. Tim Allen is one of my favorites.

8. The Polar Express.  This was the book my mom read every Christmas Eve growing up.  So, when the movie came out I was a bit anxious and ready to be disappointed.  Though not the book, I do think it is a very moving story and the producers did a great job.

9. Holiday Inn.  This is more my favorite than the kids'...but it's still a great movie!

10.  Arthur Christmas.  We just watched this one over Thanksgiving and I instantly needed to add it to my favorites list.  I loved it!
1 comment:
Labels: Christmas, Living with Our Family

Where is the Time Going?

We're almost halfway through December!  It seems each day is filled with some activity or another.  I'm enjoying it, but I'm ready for the relaxing vacation to begin as well.  :-)

Years ago I remember a talk that made a great impression on me.  It was actually just one statement really.  The man was talking about his daughter's senior year in high school.  Somehow she had sustained an injury and was "down" the rest of the year.  Being their youngest child, he and his wife noticed a considerable difference between her final year of school and their other kids.'  Then he said, "It was the most beautiful year we'd ever had."  He explained the reason it was so beautiful was because her injury had slowed them down.  They had more time with her.  At the end of it they didn't feel the normal question burning, "Where did all the time go?"

As I was driving from one place to another today, that talk popped into my mind.  When we are bustling and busy, we are bound to ask that question.  On the other hand, when we slow down to read one more story to our children, to play a game, or to just sit and listen to them, we don't feel that loss of time so drastically.  It may just be a minute or two in our day, but that minute or two will be precious to our children...and for us as well!


"Isn't it true that we often get so busy? ...I think of our Lord and Exemplar, Jesus Christ, and His short life among the people of Galilee and Jerusalem.  I have tried to imagine Him bustling between meetings or multitasking to get a list of urgent things accomplished.  I can't see it.  Instead I see the compassionate and caring Son of God purposefully living each day.  When He interacted with those around Him, they felt important and loved... He blessed them, ministered to them.
He lifted them up, healed them.
He gave them the precious
gift of His time."
- - President Dieter F. Uchtdorf, Ensign Nov. 2012 - -
No comments:
Labels: Living Motherhood, Spiritual Living

I know.  I need to face the truth someday.

MY BOY IS GROWING UP! 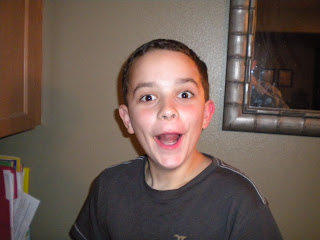 And, it's time to hold on for dear life because today I am now the PROUD new mother of a TEENAGER.

My mom loved the teenage years of her children.  And, frankly, I don't think they were so bad either. However, since then I have heard the horror stories, seen the looks of sympathy, and cringed at the comments concerning "those detestable years."

Still, I am choosing to side with my mother on this one.  This year as I've watched my son turn into a young man I've realized that I love it!  We've had some social gatherings here at our place in the past few months and I just love listening to the youth enjoying themselves joking, eating and yes...even flirting.  :-)  I have enjoyed watching my son come out of his shell to, heaven forbid, talk to girls.  I really am looking forward to these next (and last) few years as my boy continues to mature and grow.

As for this son of mine...I couldn't have asked for a better first child.  He is obedient and truly desires to choose the right.  He jokes and takes care of his younger siblings, paving the way for them to follow.  He is full of a happiness that lights up the room when he enters.  Today I thought back again to thirteen years ago when I welcomed him two months earlier than expected and marveled in the fact that he truly is a miracle in my life.

Oh, and yes, just yesterday I accepted the fact that....

He is now taller than me!!!

So, Happy Birthday, John.  It's going to be a fun ride!
No comments:
Labels: John, Living with Our Family

I like to read a Christmas-based novel aloud to the kids this time of year.  We've read in the past, A Christmas Carol, The Family Under the Bridge and The Life of Our Lord by Charles Dickens.  This year I have chosen, Miracles on Maple Hill.


In honor of this book (and from a suggestion sent by my mother) we created our own Miracle Jar for the month.  Each night before family prayers we are to write on a slip of paper one miracle, blessing or things we're grateful for from that day and place it in the jar.  On Christmas Eve we will empty the jar and read of the Lord's hand in our lives throughout the month.

In his address during the First Presidency Christmas Devotional, President Uchtdorf asked of us this question, "Are we gracious receivers?"  We think so much about giving at this time of year; this is good!  But I loved this reminder to be gracious receivers, to be thankful for the blessings given and to remember the greatest gift (and miracle) given by our Lord and Savior, Jesus Christ.

Mormon 9:9-11, 15-20
For do we not read that God is the asame byesterday, today, and forever, and in him there is no cvariableness neither shadow of changing?  And now, if ye have imagined up unto yourselves a god who doth vary, and in whom there is shadow of changing, then have ye imagined up unto yourselves a god who is not a God of miracles....

But behold, I will show unto you a God of amiracles, even the God of Abraham, and the God of Isaac, and the God of Jacob; and it is that same bGod who created the heavens and the earth, and all things that in them are.  And now, O all ye that have imagined up unto yourselves a god who can do ano miracles, I would ask of you, have all these things passed, of which I have spoken? Has the end come yet? Behold I say unto you, Nay; and God has not ceased to be a God of miracles.  Behold, are not the things that God hath wrought marvelous in our eyes? Yea, and who can comprehend the marvelous aworks of God?  Who shall say that it was not a miracle that by his aword the heaven and the earth should be; and by the power of his word man was bcreated of the cdust of the earth; and by the power of his word have miracles been wrought.   And who shall say that Jesus Christ did not do many mightyamiracles? And there were many bmighty miracles wrought by the hands of the apostles.  And if there were amiracles wrought then, why has God ceased to be a God of miracles and yet be an unchangeable Being? And behold, I say unto you he bchangeth not; if so he would cease to be God; and he ceaseth not to be God, and is a God of miracles.  And the reason why he ceaseth to do amiracles among the children of men is because that they dwindle in unbelief, and depart from the right way, and know not the God in whom they should btrust.
No comments:
Labels: Living with Our Family, miracles, Spiritual Living, Traditions
Newer Posts Older Posts Home
Subscribe to: Posts (Atom)