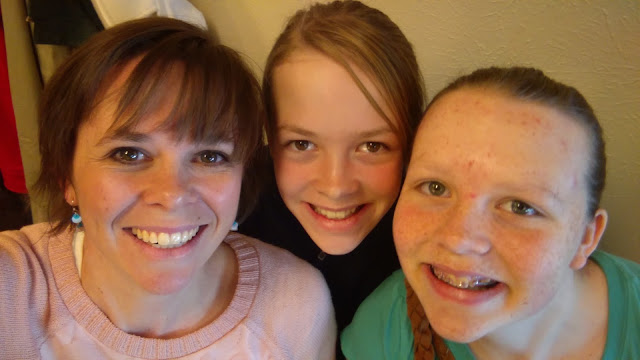 My daughter has anxiety. It manifests itself by her lashing out in anger, saying mean things though she doesn't really mean them, honing in on annoying habits (like loud chewing).  She will have a night here or there where she can't sleep or relax because of some major project coming up that she doesn't like or want to do.  Speaking in public can really make her anxious.  I've been watching and helping her through this for the past seven years (with some counseling as well).  It's been an uphill battle but she is learning how to conquer her fears and talk herself through these emotions.

A lot is being said about anxiety these days.  I have wondered why it seems so much more prevalent now than it was in the past.  Maybe it's always been there, but we just haven't talked about it. ?? Usually when anxiety is talked about it's described as "panic attacks" where an individual can't breathe or "clams up."  My sister would become immobilized when her house wasn't clean and she couldn't figure out where to start.  Others will avoid social situations because it just feels uncomfortable and overwhelming to interact.

Well, for the past several years I have dealt with chronic muscle pain.  Mostly the pain is targeted on my lower back, but there are other trigger points along the right side of my back and I experience muscle weakness in my arms.  Usually, it's manageable and I just need to "work out the kinks."  Since moving, however, I have had many more "attacks" so to speak to the point where I'll have days when I cannot walk.  Years ago I went through ever test imaginable - - nerve tests, MRI's, blood tests - - all of it!  After ending up in the ER during the most serious episode, I went to physical therapy for a few months.  I tried the chiropractor and have done yoga for the past few years (which has been the most helpful up to this point).  I was finally diagnosed (a.k.a. given the label) with Myofascial Syndrome - - a cousin to Fibromyalgia.

After talking with a friend and reading some stuff she lent me, it's dawned on me that at least some of this pain could be coming from anxiety.  I don't have those "sure tail signs" people talk about - -the panic feeling, shying away from social situations, afraid to speak in public, etc. - - but I have had some extra stress in my life the last few years and so I can't help but wonder if sometimes my "episodes" are a result of anxiety or tension build up.  So, I've been exploring this idea and will be learning more in the upcoming months. It's worth a try, anyway!

Having my daughter, hearing others' stories, and experiencing some of this in my life has opened my eyes more to the fact that we just don't know what is going on in people's minds.  A popular LDS hymn says, "In the quiet heart is hidden, sorrow that the eye can't see."  As I get older and learn more about others and myself I see that this statement is so, so true!  We just never know what story is lurking "behind the scenes."  It is important to love one another, to cherish the differences in one another and be merciful when others seem to falter.  And just as important is taking the time to know ourselves, accept ourselves and be merciful with ourselves.

"There are cycles of good and bad times, ups and downs, periods of joy and sadness, and times of plenty as well as scarcity. When our lives turn in an unanticipated and undesirable direction, sometimes we experience stress and anxiety. One of the challenges of this mortal experience is to not allow the stresses and strains of life to get the better of us—to endure the varied seasons of life while remaining positive, even optimistic." - -Elder L. Tom Perry, Oct. 2008
Labels: Healthy Living Living Motherhood Living with Our Family Spiritual Living