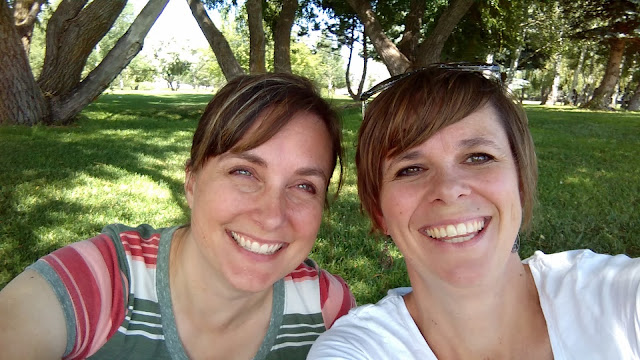 I recently spent 10 days (off and on) with my very best friend, Kelly.  Her daughter just had a baby and so Kelly came to stay with me while she jumped back and forth to take care of the new mommy.  Yes!  I am now close to Grandma status!!  It's so hard to believe.  Having my dear friend here all that time gave us plenty of time to talk, laugh and cry.  It was refreshing to be with someone who knows me and loves me anyway!

Kelly and I met at girls camp.  Our stake in California covered several towns, ours being half an hour apart. We were twelve.  I'm not even really sure what attracted me to the young women in her ward, but I just remember wanting to be around them.  After that we would see each other at stake events (including more girls camps) throughout the years.

And then came our fourth year at camp.  At that time, the 4th year campers were calling "Adventurers" and they would go on an overnight hike the weekend before girls camp.  Because Kelly and I had fall birthdays, we went the year behind our friends and the girls in our same grade at school.  I immediately latched onto her and the duration of the hike I talked and she listened! A match made in heaven.

I found the journal entries from that year at camp:

"So far it's been pretty fun.  A girl named Kelly is the only one from C.  We've sorta been palin' around together most of the time.  Actually, pretty much all of the time!  She's so great!...We walk around and talk, tease each other, and goof off.  We have this thing for kissing up to [our leaders].  We're gonna see who's the beset kisser-upper by the end of the week.  It's going to be loads of fun.  Anyway, Kelly's really fun to be around!"

I remember that week!  The week Kelly and I became real friends.  At the end of that week I wrote:

"It was pretty hard to say good-bye to everyone, especially [our leaders] and Kelly.  Kelly and I were practically inseparable the whole week.  Now we're not together and it's actually kind of weird.  I hate it.  We're so much alike, yet we're so different!  She's so awesome and I love her so much.   I hope she realizes that despite how much I've joked with her and stuff."

I feel the same today, after spending this last week together.  Having her here has made me wonder what it takes to build such a deep friendship.  We joke that what's kept our friendship going is that neither one of us will stop writing back!  But it's kind of true - - we have a private blog to prove it.  It's been through our writing to each other that we have built deep friendship and connection.

WHAT WE KNOW ABOUT FRIENDSHIP

Any relationship you desire is worth the fight, the time and the energy it takes to get there.  According to Psychology Today, it takes three elements to build such a friendship:  investing time, accentuating the positive, and being helpful (give and take feels equal).  If we want that kind of friendship, we need to be that kind of friend.  I only pray that I can do those things to nurture my dearest friendship.

"Friends are the surest defense against one of the most ruthless killers:  isolation....one unshakeable imperative: If you want to live a long and healthy life, invest in friends, particularly in midlife (Life Reimagined, p. 88)."  It's during midlife that forging deep friendships is the hardest.  I've experienced that in my own life.  Currently, I still want to make connections, but where is the time to invest?  Midlife is also the most stressful period of our lives and when stress rises our inclination is to isolate, to say no to more - -  more things and more people.

"Animals actively work to build...friendship bonds.  They do it...to avoid being eaten by predators. Multiple studies...have shown that animals with the strongest social networks live longest...'What friendship is at the end of the day...is creating small-scale, intensely bonded groups that act as a protection [to life's] stresses (Psychology Today).'"  Probably another topic for another day, but this leads me to wonder why friendships are as vital (if not more so) as family bonds.  Maybe there is something about someone choosing to be in your life.

The greatest friendships are the ones who support our identities.  My greatest friendships have been forged with time, energy, and no strings attached.  There is mutual give and take.  There is sharing the good and the bad.  There is genuine joy when there is success or cause for celebration and there are tears shed when grief is inevitable.  There is the belief that someone loves Julia simply because she's Julia.  I want others around met to feel this same security.

Friendship has always been a lifeline for me.  I have been blessed to have good friends throughout my life, but it hasn't always been easy.  I think the main barrier to developing deep friendships is our fear of being truly vulnerable with another person (other than our spouses).  It can be scary to get that close.  Until recently, I didn't realize what a risk it can be to open yourself up to another person, hoping they will love in return.  It's in those moments when I cling even harder to this friendship that has lasted beyond any expectations.


BACK TO THE BEGINNING

After that first week of girls camp, Kelly sent me this poem, unknowingly a prophecy of what today would be:


"We're joined in a friendship that time cannot sever.
With bonds we have built we'll remain friends forever.
We're welded in spirit, attached by our hearts.
We're fused by the feeling that friendship imparts.
We're tied by emotions, connected by dreams.
Reinforced by our hopes, unified by extremes.
No longer a function of time or of space,
Our love is a substance that life won't replace."
- Bruce B. Wilmer -
Labels: Living with Our Family