Lord of the Flies (spoiler alerts)

Oh my goodness!  I so hate it when I read an amazing book and have nobody with whom I can talk about it!!  I just read Lord of the Flies for the first time and I loved every minute of it.  I know, it's one of those love it or hate it type of books, very controversial (thus the strong desire to discuss it in depth!), but I'm on the loved it side of the line. 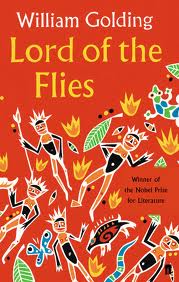 First of all, I like books that are different than the norm, books that take a little more brain power to develop and write.  This was that kind of book for me.  I had envisioned a very depressing ending, too, and so was pleasantly surprised that it wasn't.

After reading this book I mostly came away with a lot of questions.

What would you do stranded on an island with a bunch of kids (the number is never known, which is intriguing in and of itself), no grown ups and nobody in charge?

What would you do for food?

What would be the most important thing to you out there in the middle of nowhere?

Do we underestimate the feelings of safety and security grownups bring to children?  I hadn't though of this quite the way I do now.  Kids put a lot of trust in the adults in their lives and can be devastated when we lose that trust.  Their whole world can become distorted, confusing and scary.

In Lord of the Flies there was one boy, Piggy, who was chubby and wore glasses.  It was his glasses that provided flame to their fires, his ideas were sound and clear.  But nobody listened to him because of his physical traits.

Do we sometimes determine who we look up to or follow simply based on appearance?  This one could go both ways.  Most people follow smooth talkers, nice looking, or those of whom they are afraid.  What kind of a leader am I?  Are my children following me because of fear or because they have respect for the decisions I make?

"The greatest ideas are simplest."

Would I follow the abusive leader for fear of being killed and just to get meat?  Or would I run and let myself be hunted like Ralph did?

Would it have been better for Ralph to allow Jack to be the leader and just follow him? Would that have calmed Jack so things wouldn't have gotten to their worst point?

Was the end battle a cause of a power struggle (were they both right) or was there really a right and a wrong in this situation?

When a book causes me to search inward, asking questions I almost don't know how to answer, that is when I know I've found a classic!!
Labels: Living Books