Mothers are All Alike

I stole these words from my mom in an email she just sent out to her kiddies.  This story touched my soul.  Oh, how I wish I could have been sitting by my own mother as she watched this bird mother send off her little ones out into the open air.  I guess we're all going to have to watch them leave someday.  :-) 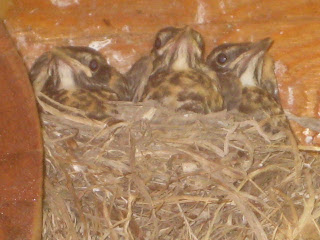 It's been fascinating to watch the growth and progress of three baby robins in a nest just outside of the front door of the small cabin. I took a picture of the three of them yesterday that I will attach. This morning, I went out on the porch to check on them, and one had already flown the coop; a second one was perched high in the nest and looking eager to be gone, too. He was so quick to be on his way. It was like he was saying, "I'm outta here! So long, Sister!" He appeared to be 'the strong, silent type'....as he never made a peep....just tended to business. The third one was still snoozing away. As I watched, the little guy took off flying to a nearby aspen branch. I have a picture of him and his mommy....who hovered nearby....and then went over to him on the branch and either gave him a treat or a kiss. 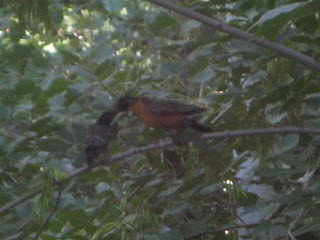 I have been watching the third little one all morning...waiting for her to fly. I'm sure she's female...because she was a real chatterbox; was taking her own sweet time!; and was doing a lot of primping! (grooming her feathers, etc. for the big event). She took hours before she finally got out of the nest and sat precariously on the rain gutter. Because it was slick, compared to the nest, she slipped off. She ended up on one of the big red rocks below the nest. She wasn't hurt....but she didn't fly. She just hopped away. I just checked on her and her mother is still feeding her as she's still down on the ground. 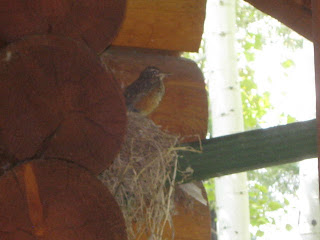