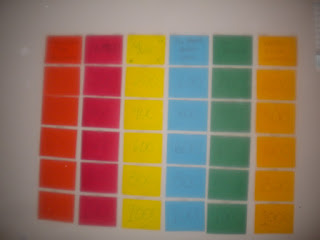 After every General Conference our family enjoys a "supposed to be fun" game of Jeopardy.
This year a few of the kids were old enough to take notes and were eager to have all the answers.  We'll see!

Do you know the answers (questions)?

1. The number of temples currently in operation.

4. The scripture story shared by both Elder Holland and Elder Hales.

5. The final hymn sung by the Mormon Tabernacle Choir.

7. The new acceptable missionary age for elders (so exciting!).

8. President Monson invited us to take inventory of these.

9. The two new temples announced in these locations.

10. He was released as church historian and gave one of the closing prayers.